I always seem to be digging around to find MySQL’s date formatting syntax, so here is a couple of common conversions…

where date is the name of your date field, and new_date is the variable name which you can use to reference the value.

A more complete list of specifiers is available here.

Sometimes a browser may be hiding behind a proxy – this little function will hopefully get to the root of things:

I had an issue with CSS today and it was difficult to figure out what exactly what was going wrong. A great way to avoid this is to reset everything before you start.

A good way to do this is to use a preset reset such as the Yahoo UI reset or the Eric Meyer reset.

While these resets are very comprehensive often it feels like you reset everything, only to then redefine a lot of properties on the elements. Eric Meyer recommends that you should not just take his reset stylesheet and drop it in your projects if there is a more effective way of using it. Tweak it. Build upon it. Customise, and make it your own.

Its been a while but I was getting characters like Â£ instead of £ (for example) and it took a quick refresher to realise what was going on. A fantastic background reading is available here.

So what is going on?
UTF-8 uses one or more 8-bit bytes to store a single character, whereas ASCII for example uses only one byte per character. This makes it more space-efficient than UTF-16 or UTF-32 as the majority of characters can be single byte encoded but with the added benefit that you can store any character, – should you need to. It uses the most significant bits of each byte as continuation bits (to signify that the following byte(s) form part of the same character) and it this is the reason that improperly displayed UTF-8 results in weird characters.

OK, enough history, – lets just fix it!
The solution is to make sure you set the character set correctly with a Content-type header.

So now that we are ready to store UTF-8 data we store some rows of data and output to the browser looks fine. However, is it really?

MySQL needs to know the character set of the data sent to it in your queries. The default connection character set is ISO 8859-1 (latin1) — treating all your supplied data as if it was ISO 8859-1, which is then automatically converted to the underlying character set of the column (UTF-8 in our case). Taking our earlier example this means that the two-byte pound sign is perceived as two ISO 8859-1 characters: Â and £. MySQL will then encode these characters separately as UTF-8 requiring 2 bytes each – double encoding as we use 4 bytes to store a single pound character! When selecting data from the table, the reverse occurs when MySQL converts the UTF-8 back into ISO 8859-1 and the browser (correctly) interprets the two bytes as a pound sign. The problem here is that while everything looks correct it is needlessly using extra storage space and CPU cycles in the conversion.

It’s very simple to change the connection character set and avoid these overheads. The query “SET NAMES ‘utf8′” instructs MySQL to treat incoming data as UTF-8, which can be directly inserted into columns with a matching charset. In practice you may issue this query after initialising your connection to the MySQL server so all future communication will be in UTF-8.

One major problem occurs when you have a table full of double-encoded UTF-8 text because it was inserted before you knew about changing the connection character set. If you then add in the extra “SET NAMES” query and output the retrieved text to a browser you will notice all the extra characters have crept in.

You may be tempted to be selective about where you use SET NAMES ‘utf8’ however it is fairly simple to modify all of the data in place and end up with clean tables. Here is some pseudocode that pulls valid UTF-8 from the table and reinserts it after switching the connection charset:

This plugin for WordPress can be set to automatically email your database or backup to a file according a set schedule. The homepage for the plugin is here

I cannot stress enough the importance of regular backups. In the event that your website becomes comprimised you can always retrieve a known good backup to get up an running again (after the vulnerabilty is made secure obviously) At Boolean we believe is is much better to be safe than sorry.

A useful cheatsheet for the Protocol library. We’ve touched on the Protocol javascript library here before, so click on the image link to then download a nifty reference. 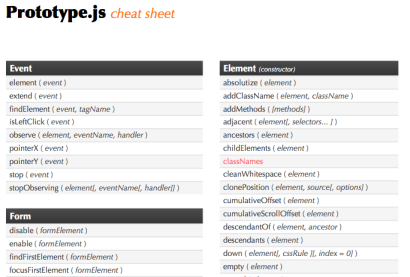 This is slightly faster than strlen() however the reason is somewhat more complicated. Essentially whilst strlen() is a function, isset() is actually a language construct. Calling a function is generally more expensive than using a construct.

How it works: text-indent:-9999px; relocates the text title off screen, replacing it by an image declared by background: {…} utilising a fixed width and height.